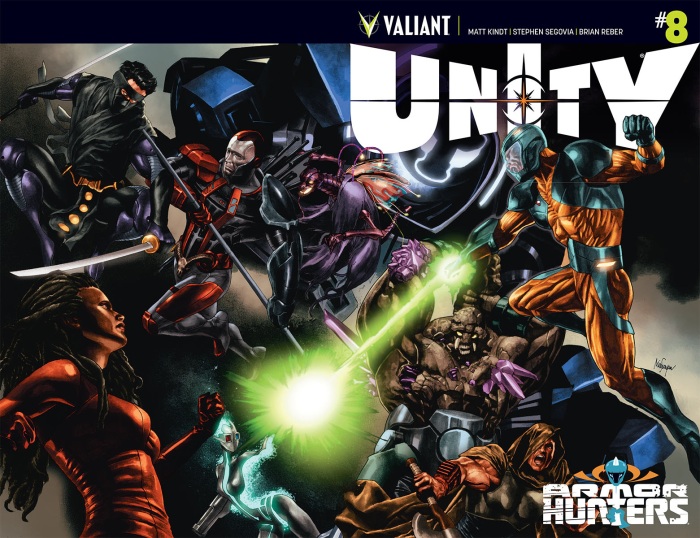 This takes place after the devastating event of Armor Hunters #1. A US city is gone after the military refused to surrender Aric’s X-O armor to the Armor Hunters. It became clear to MI-6 that they will need to act fast and set a plan in motion to counter the Armor Hunters. Livewire was sent out in search of a potential recruit that could be Unity’s best weapon of defense. Ninjak and Gilad the Eternal Warrior are on a mission of their own to investigate the military armor bunker that was taken out by the Armor Hunters. What will they find upon arrival? Which of the two teams will complete their mission? or die trying?! All this plus a new challengers enters the war…..BLOODSHOT!

The Ups: Kindt does a fantastic job setting up the second part of the Valiant summer event. If you haven’t been reading Unity, as you should, this is the perfect jumping on point. Not much praise is given to the recap page that is in a comic book but this one deserves it. In half a page and 3 small paragraphs you get the series so far without needing to ask questions or feeling lost. It makes me feel like I have been reading the series which is what a proper recap page should do. Kindt set this story immediate after the events of Armor Hunters #1 which I suggest you read first to get the full aspect of the war but it isn’t necessary. That is one of the issue’s strongest attribute, the ability to stand alone and still be enjoyable. Livewire is an interesting character. She was tasked to find Bloodshot and the confrontation could have been deadly but the character’s ability to stand her ground and assert herself, rose my interest level of her. Livewire’s dialogue sets the mood and tone of MI-6 which is that they are in need of people and they won’t give up on getting the best assets for the Unity team. Ninjak and Gilad are the best buddy cop team I have seen this year. Kindt plays off the differences in the characters to create humorous scenes and dialogue set in the middle of a dangerous mission. He does a great job to alleviate the pressure by having a strategical character team up with an unpredictable one. Gilad tries to instill his hundreds of years of experience while Ninjak just says “You think too much” as he proceeds to crash a plane for a huge diversion that sends a recon mission into a frenzy. I had a few chuckles reading these two characters’ interactions. Kindt continues to build the foundation laid by Venditti and connect the issues seamlessly while lead us to a big showdown in X-O Manowar #26.

Segovia detailed pages makes the visual aspect of the story feel real. He puts a lot of detail into the art such as the scene with Livewire talking to Bloodshot and being able to see faces of people on Bloodshot’s face. Segovia really took his time to project each face and not short hand it. It is quite impressive as some artist would not see it necessary. His use of a transparent background to show Gilad’s past memories is a great use of a panel without losing the progression of the current scene. Segovia is able to provide a comedic moment through the grunting facial expressions of Quartz. They are meant to be serious but there is a hint of comedy behind it. The fight scenes are dynamic with hard hitting actions that will keep you glued to the pages. Reber contributes a mixture of dark and bright colors in a dark setting that illuminates the issue.

The Downs: One thing did I am nitpicking about is Bloodshot’s purpose. That is a piece of information that I wish was given to me: Why did Bloodshot joined Unity? not sure if they are saving it for the Bloodshot issues or it’s suppose to be kept secret. Might be too early to reveal that.

Overall: This issue is the definition of fun action packed story. Kindt keeps the momentum going for the Unity team and creates the new buddy cop team of Ninjak and Gilad. Artist Segovia does a superior job on art creating an intricate environment and bombastic fighting scenes that explodes in every pages. This is a sure hit! If you have room this week, pick it up and the rest of Unity. Armor Hunter is building to something big, so make sure you’re there to see it!