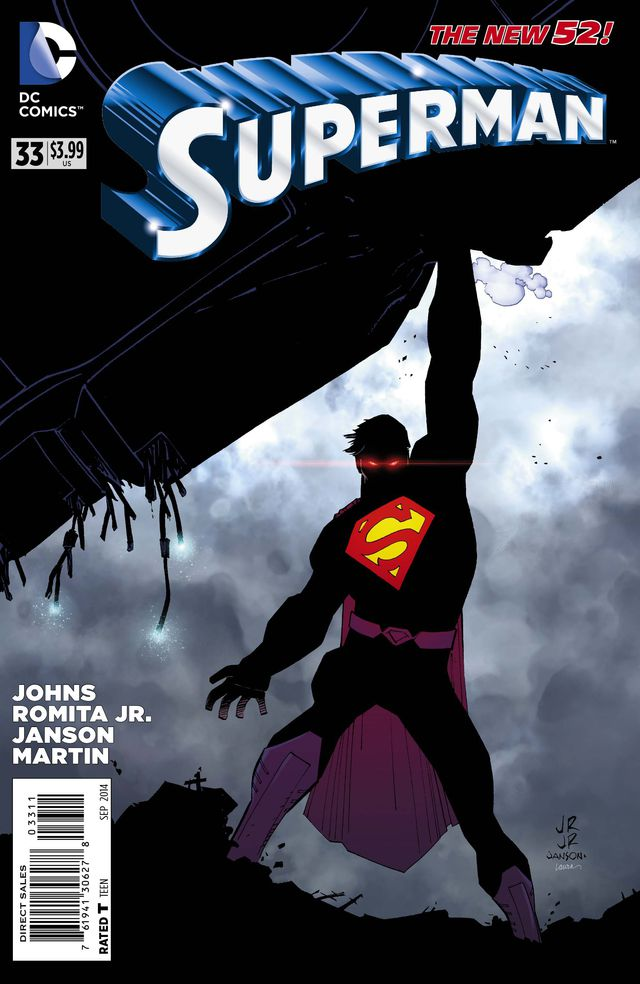 THE MEN OF TOMORROW: THE NEW SUPERMAN

After his battle with Klerik, Superman and Ulysses take some times to get to know each other. It has been a long time since Ulysses has been on Earth. Meanwhile Clark Kent returns to the Daily Planet for some information on Ulysses project from the person who reported it: Perry White! What secret will Clark reveal about Ulysses’ past and who is the mystery figure lurking in the dark?

The Ups: I’ll say this right off the bat, I am enjoying the new creative team on Superman. Geoff Johns has gone back to his older Superman run and captured some of the elements and mixed it in with the New 52 Superman to create a delightful balance. I enjoyed see Clark back in familiar places such as the Daily Planet. I felt as if I got home from a cold winter day and there was warm soup on the table. It was quite the comfort feeling. Johns takes this issue to tell the readers more about Ulysses’s past and uses Perry White as his character of choice to help unravel the past. I am glad to see one of Clark’s lesser involved character being more prominent. Johns does great storytelling with Ulysses. We get to see the character come into our world and going through a bit of a culture shock that we could have seen from Clark if he was not found by the Kents. This issue was a pleasant read that has a warming experience.

The art by John Romita Jr. and Klaus Janson was stellar. I feel Romita has improved since the first issue and is getting into a comfort zone. I noticed more consistency in facial drawing of characters. Ulysses’ and Superman’s face were constant throughout with no weird facial structures. There is also more variation in the poses of the characters that did not go unnoticed.The panel story telling was one of Romita’s best. There were a couple of silent panels that progress the story through expressions and body language that were stunning. Laura Martin is making this book amazing each time. Her colors are the right combination of light and dark that book needs to make it go from average to super.

The Downs: There is a couple of time in which Johns gets carried away with the dialogue. It became a bit narrative at some point. There is a page in which Clark is talking to Perry White about Ulysses and the panels are mostly word bubbles. It got overwhelming to read. I felt there were somethings that Johns did not have to tell us and we could have figured it out from the context. It would have helped cleared some space on the pages.

Overall: Johns is bringing a classic feel mixed in with the new. It is great to feel like I am reading Superman again. People talk about John Romita Jr. losing his passion. Well it is safe to say that John got his groove back. This is one of the best Superman work I have seen since the New 52 launched. Now is the right time to get back into the series and believe again.

One thought on “Superman #33 Review”